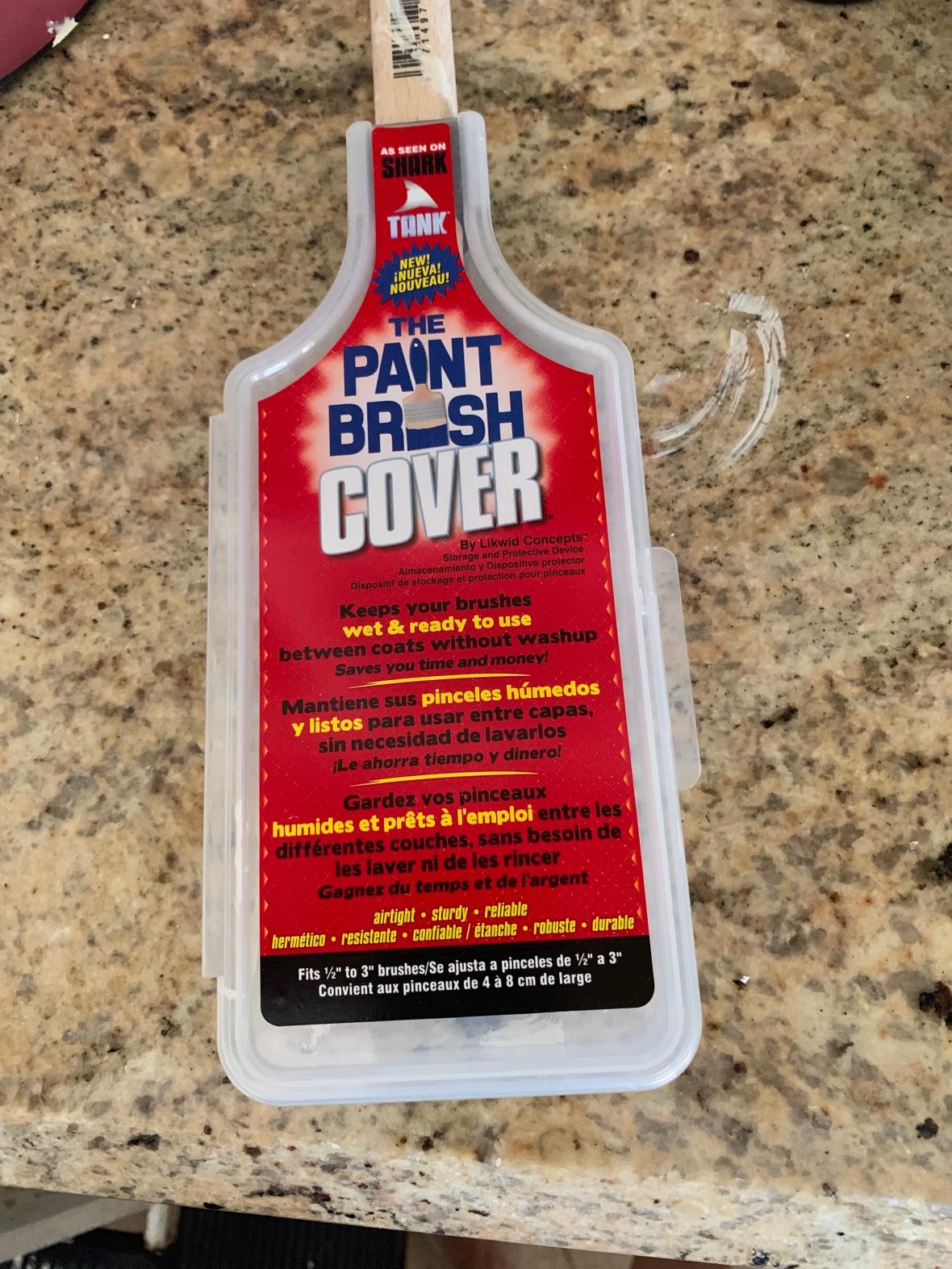 This is a random post about a favorite new painting product. I have been painting our master bedroom this past week. My German engineer boyfriend loves perfection…of course. He has been traveling on and off over the last month. On a recent trip home he discovered a garbage bag full of used brushes and rollers. He questioned why there were so many and why I didn’t just clean them. Really? I have tried to clean brushes and they never seem to be soft enough to use again. While shopping at Home Depot I noticed this brush case for wet brushes. I quickly picked one up. After painting that day I stored my brush with paint on it in this case. I was so happy the next day to find it ready to use. I went back to Home Depot to pick up the storage case for the roller brush…but found out they just discontinued both products the previous day. I stored my roller in a plastic bag and that seems to work. Anyway, if you have an upcoming project and you see this product in a store, buy it! I am sure they can be bought online too. Now if I could find a product to make me a better painter.

This may seem a little strange to some. I love my dish towels. I change them to match the season. My favorites are Williams Sonoma towels. They are also a great gift as many do not spend money on nice kitchen towels. I also have aprons to match.

I have been wanting to try the Beyond Meat Burger for the last couple of weeks. We are trying to eat less beef for health reasons. One of our current favorite burgers is the onion flavored turkey burger. I like to top it off with A-1 sauce. Delicious! Anyway, back to Beyond Meat. We grilled one burger with seasoning, one without. Both were very good. I think better than our current favorite turkey burgers. We didn’t eat them with a bun or add A-1. The burgers are tasty, full of flavor and around 220 calories. I thought they would be full of vitamins and good for you. They are not meat and that is what makes them healthy I am guessing. I don’t know enough about the ingredients to make a statement about the healthiness of these burgers. In a bun I think the average person may not notice of it is beef or not.

Every trip to Munich should include a stop by the Hofbrahaus. Even if you don’t drink you should stop by to see the decor and get a feeling of old school Germany. I was amazed at the art on the ceiling. For some I thought the Hofbrahaus would be much bigger. Don’t get me wrong…it is big…but I had images in my head of it being more like the one in Las Vegas. Lol! We spent a little bit more tome there than what we thought we would. But, met some fun people. One couple joined us on our tour of castle Neuschwanstein the next day.

Love this big beer. Don’t like how I look in it! The weather is much drier than Florida. And I admit, we had been to a couple of other pubs before this one. It shows.

The locals have a table specially reserved for them. Next time…we are dressing up!

Keukenhof, Holland is where the tulip garden is…about half hour away from downtown Amsterdam. Every year from mid March to mid May visitors are able to see almost 60 acres of where 7 million flower bulbs are planted. We were there May 1 and we noticed some of the tulips were done for the season. There are so many flowers you hardly notice some are gone. Advice if you go here…go as early as possible in the day. Around 11 am it is so crazy you can hardly walk. We were glad to leave. I have never seen so many tour buses! Hope you enjoy the pictures. I did not use a filter on the pictures with flowers in them. 🌷. A couple of more days in Germany and then we head back to the US. Straight to a conference in San Antonio. 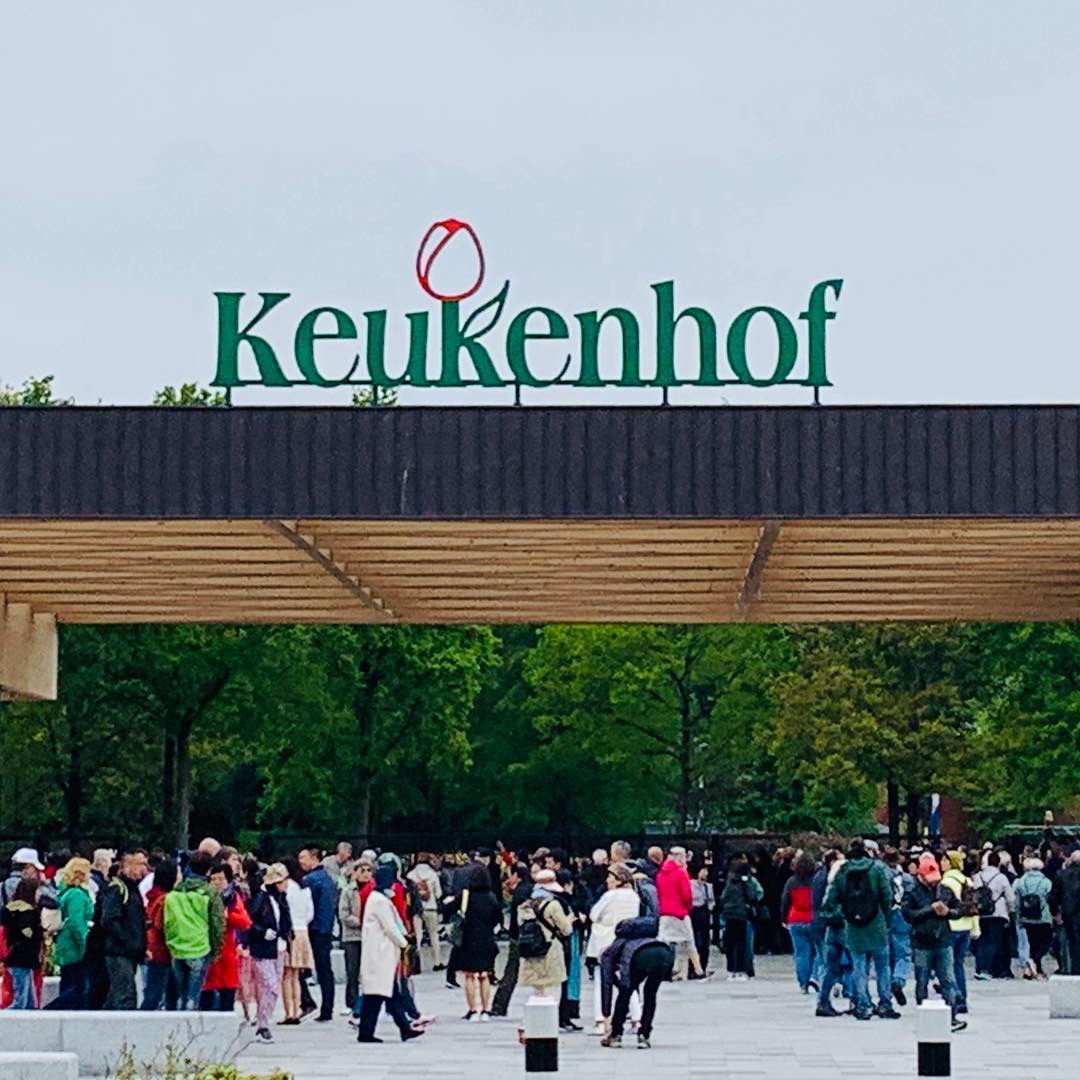 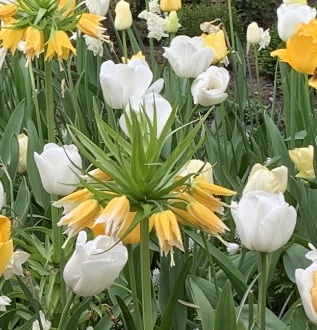 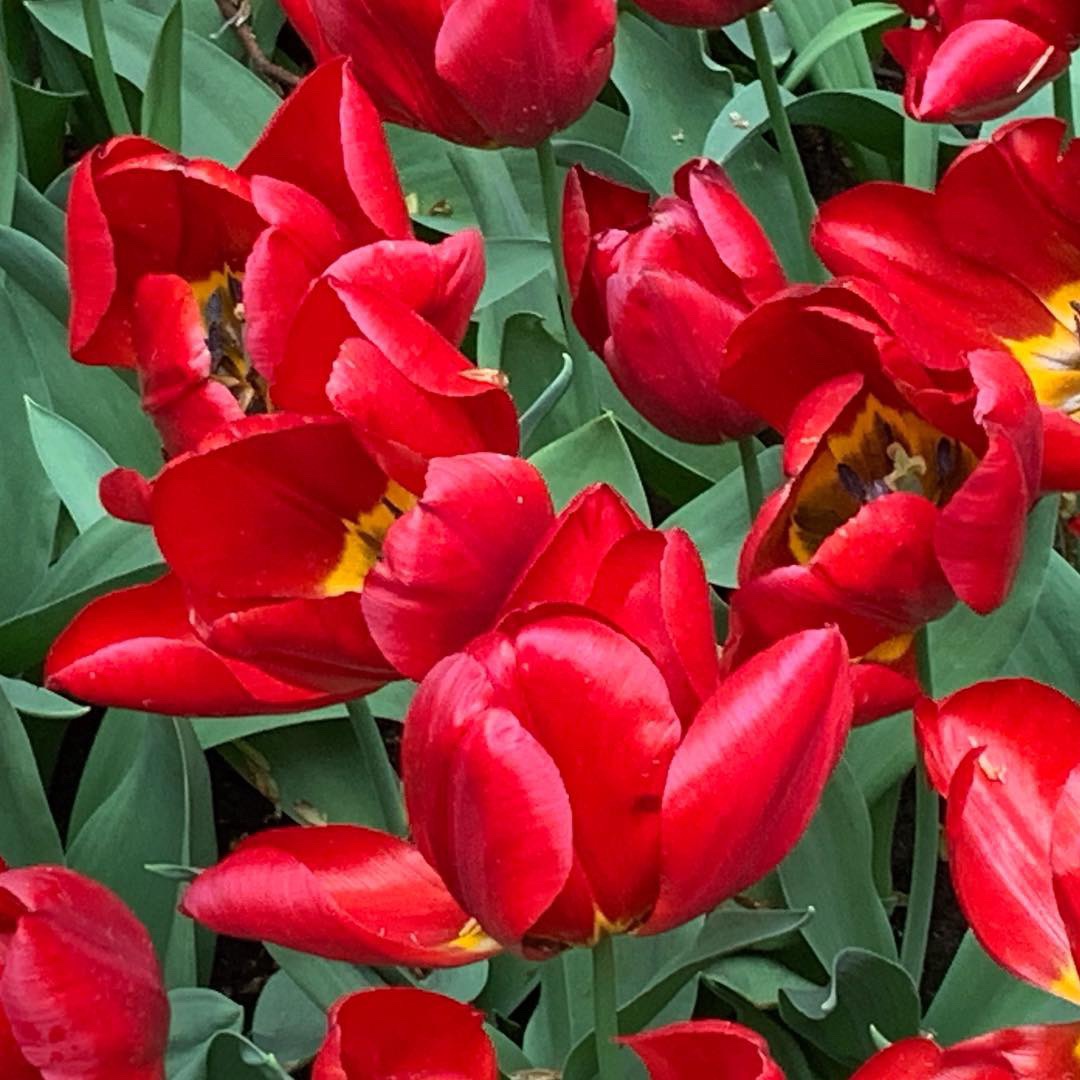 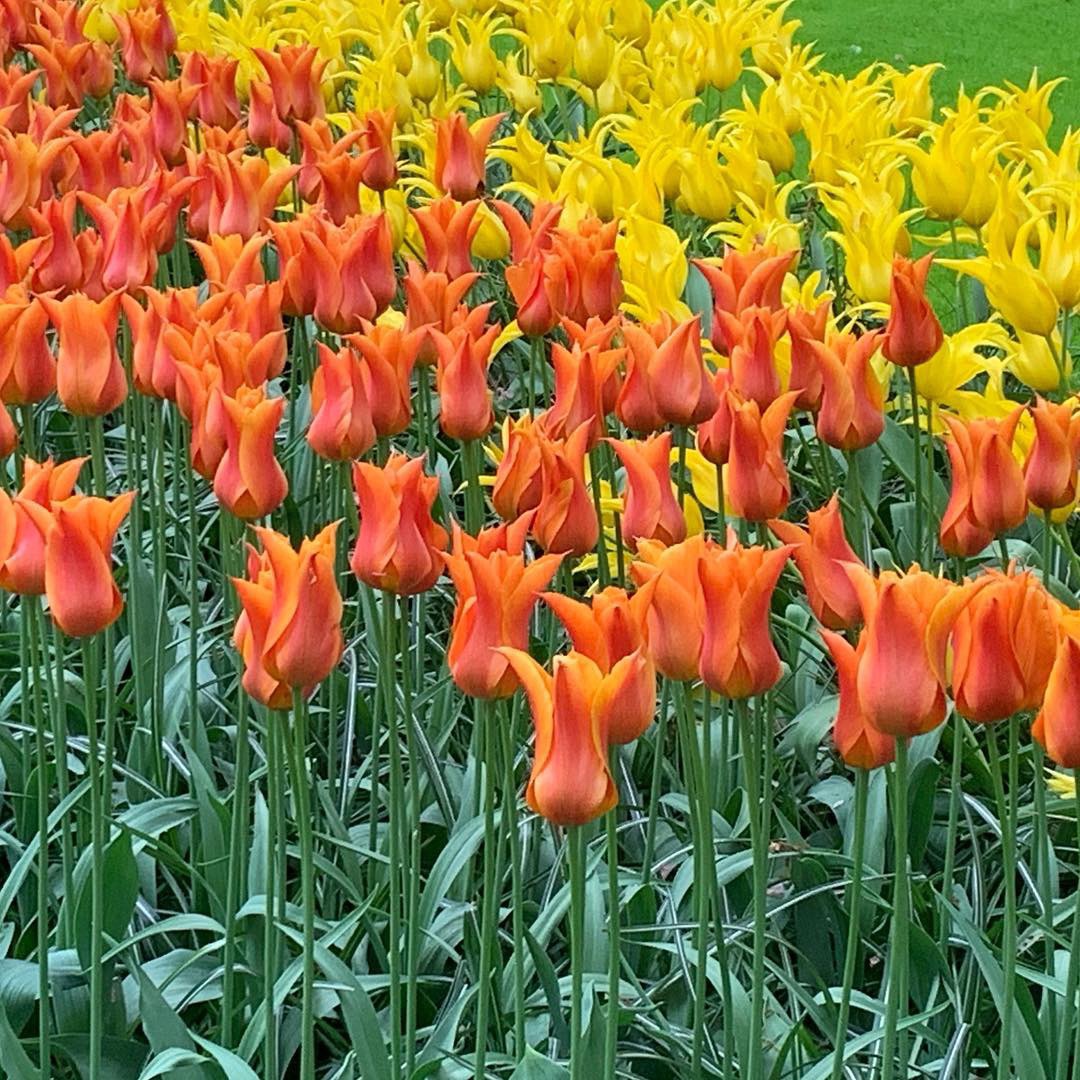 We drove from Munich to castle Neuschwanstein…I still struggle to say it. King Ludwig loves swans…and swan is in the name so that will help you in the future. Anyway, the drive was about two hours. You could feel the temp drop as we got closer to the castle. If you follow my posts you may notice a passion to view old mansions, churches and castles. As I reflect…many of those famous homes are not lived in very long by the person that built them. King Ludwig became king at a very young age. I would say he was eclectic and grand….with a touch of gaudy. He liked to live at night. From what I can tell he had a fascination with a male artist. After watching the Freddie Mercury story on the plane over to Germany…I am guessing King Ludwig was gay. They were similar. Touring the castle was not what I expected. You don’t see much of the castle because it wasn’t completed by the time they found King Ludwig and his psychiatrist dead in the lake. We were not allowed to take pictures inside the castle. I will post a link to the pictures. We were able to visit the servant quarters, the kings quarters, a room with a stage, a podium for a future throne and the kitchen. As you look around many things were shaped like a crown with bright jewels, for example the chandeliers. And the detail on hardware was evident…many shaped as swans.

Important advice! Buy your tickets online. The line to buy a ticket was very long. And you may end up on a tour hours later. Or maybe no tour may be available the rest of the day. 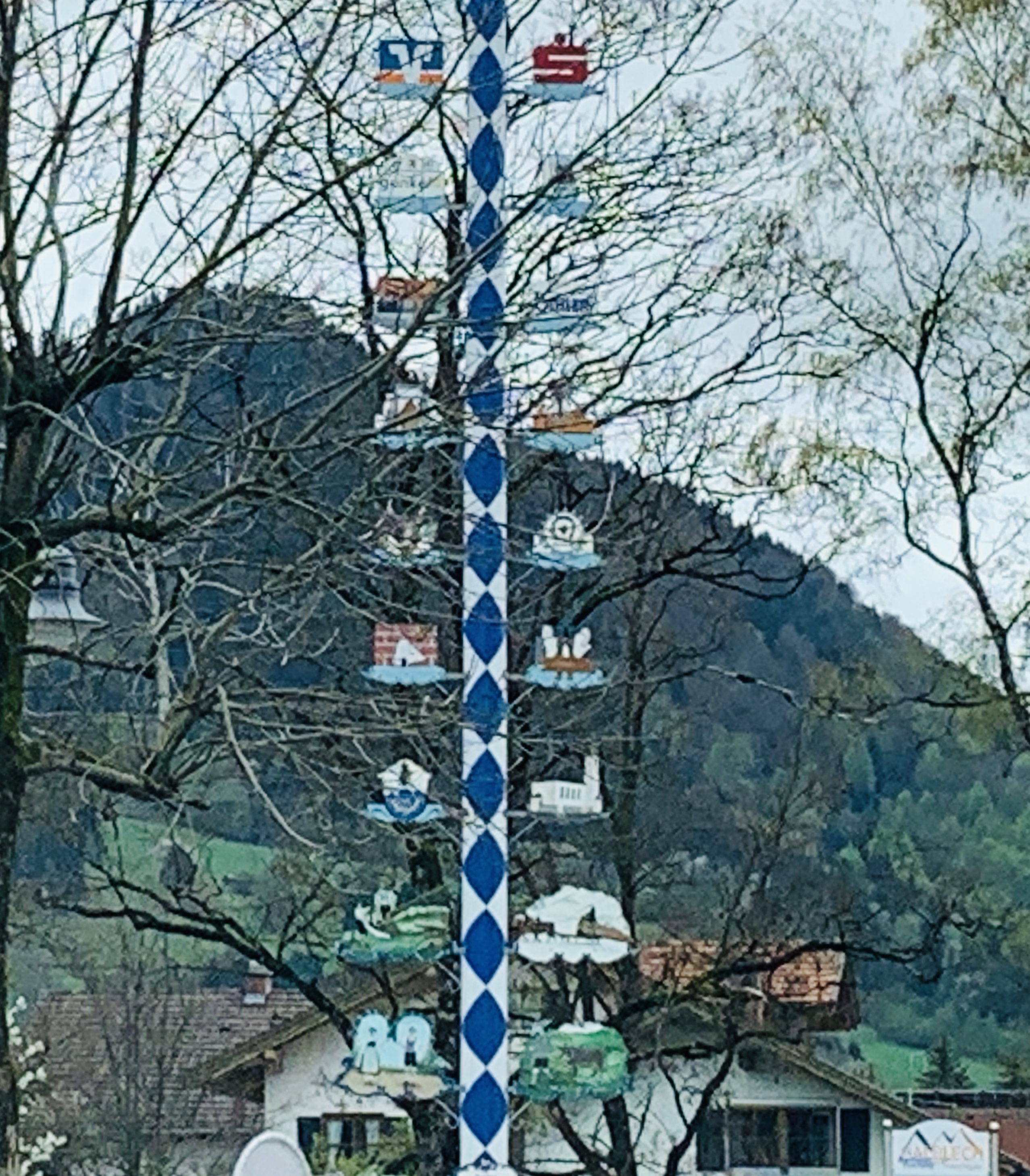 Poles in the villages that have symbol for trades/jobs you will find there.

Look closely, you will see the castle.

If your tour is not for a couple of hours. There is a restaurant up close to the castle. We stopped there for beer and pretzels. I. The way down from the castle we stopped for doughnuts. 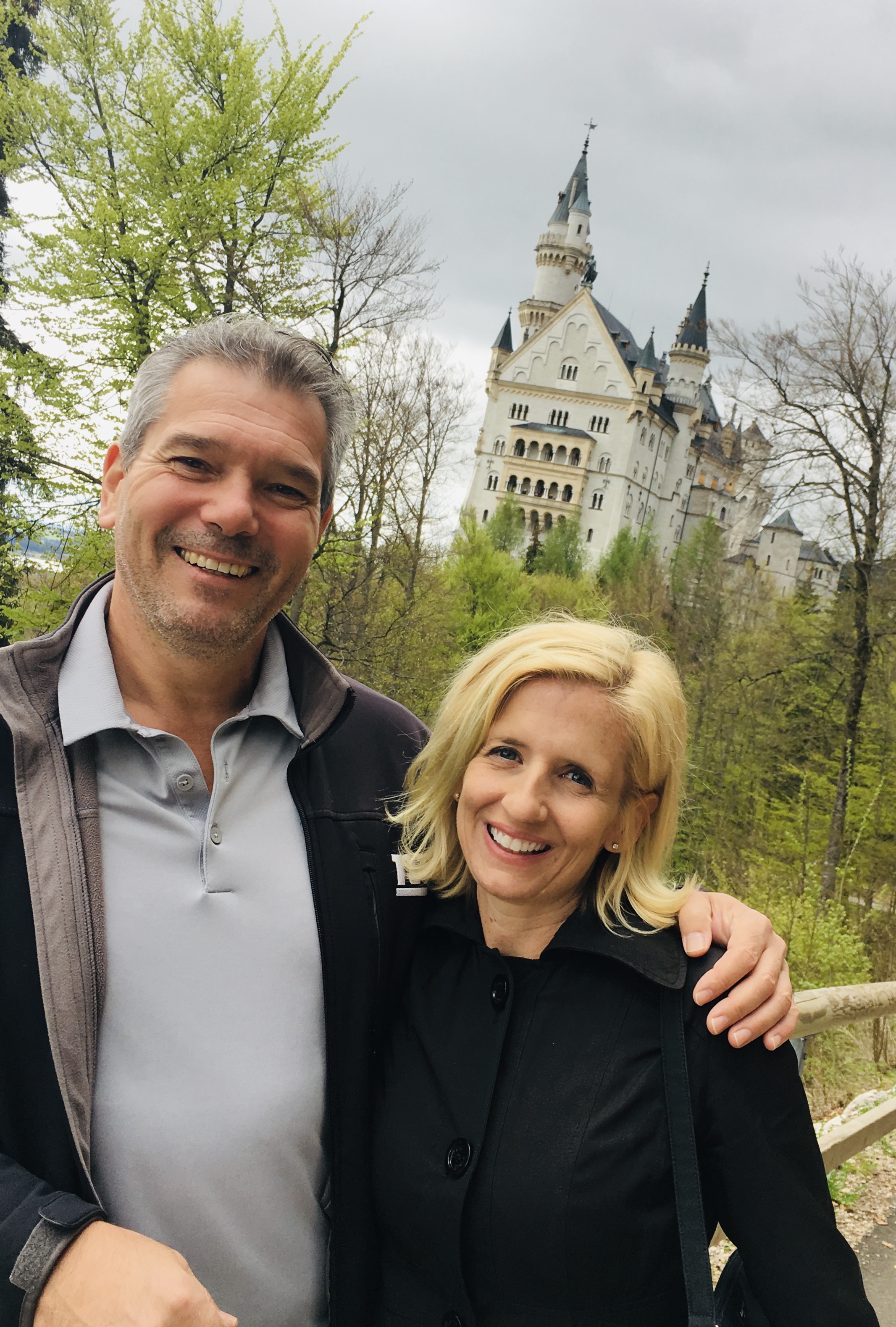 Next door is the castle King Ludwig grew up in.

Looking down from the bridge.

Beautiful view of the castle from the bridge. 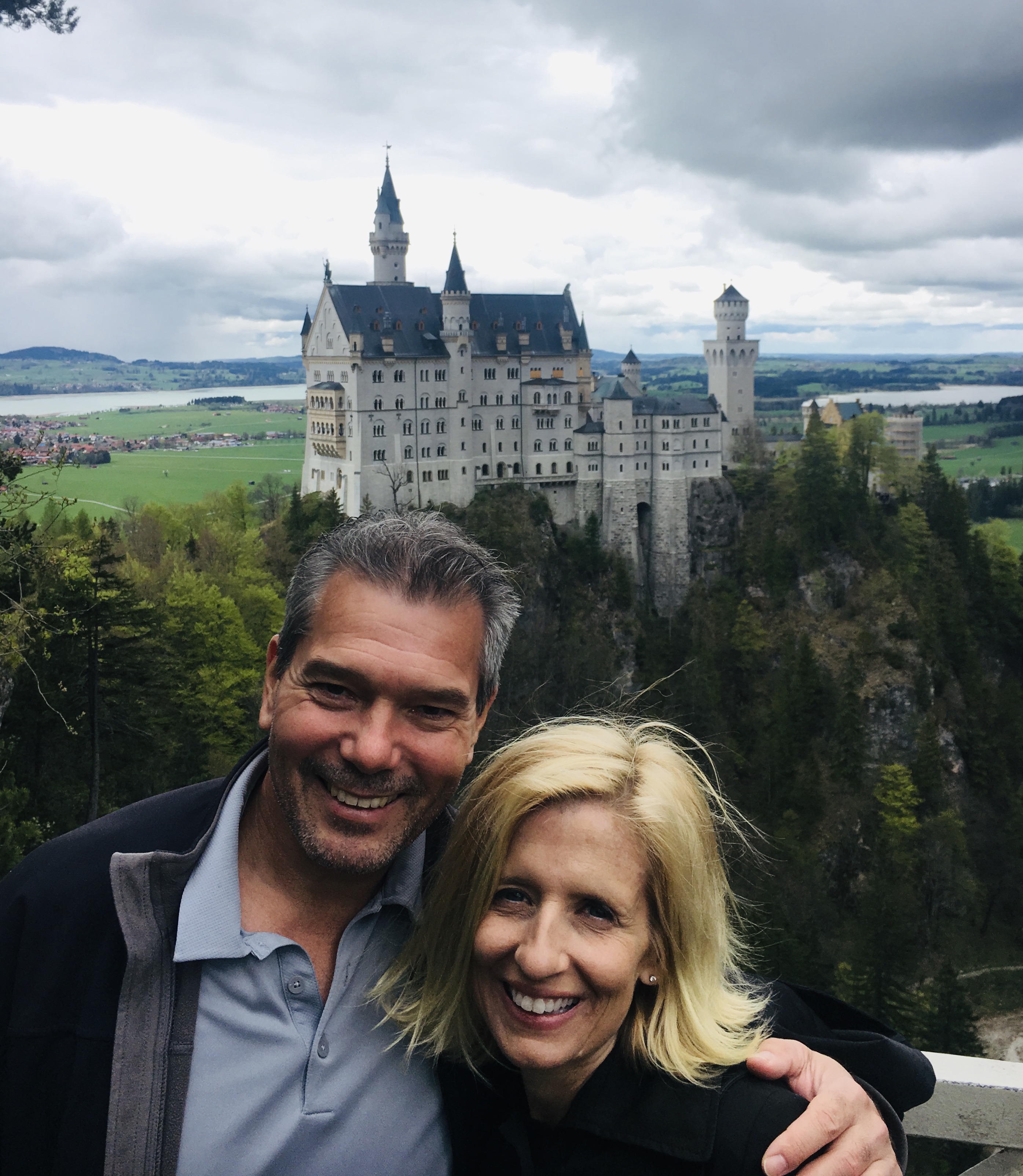 Saturday we drove from Mainz to Munich. I LOVE Munich. So beautiful. Old historical buildings and a 910 acre English Garden with many canals…and believe it or not…surfers. We spent quite a bit of time in the market place and ended the night with big beers at Hofbrahaus. 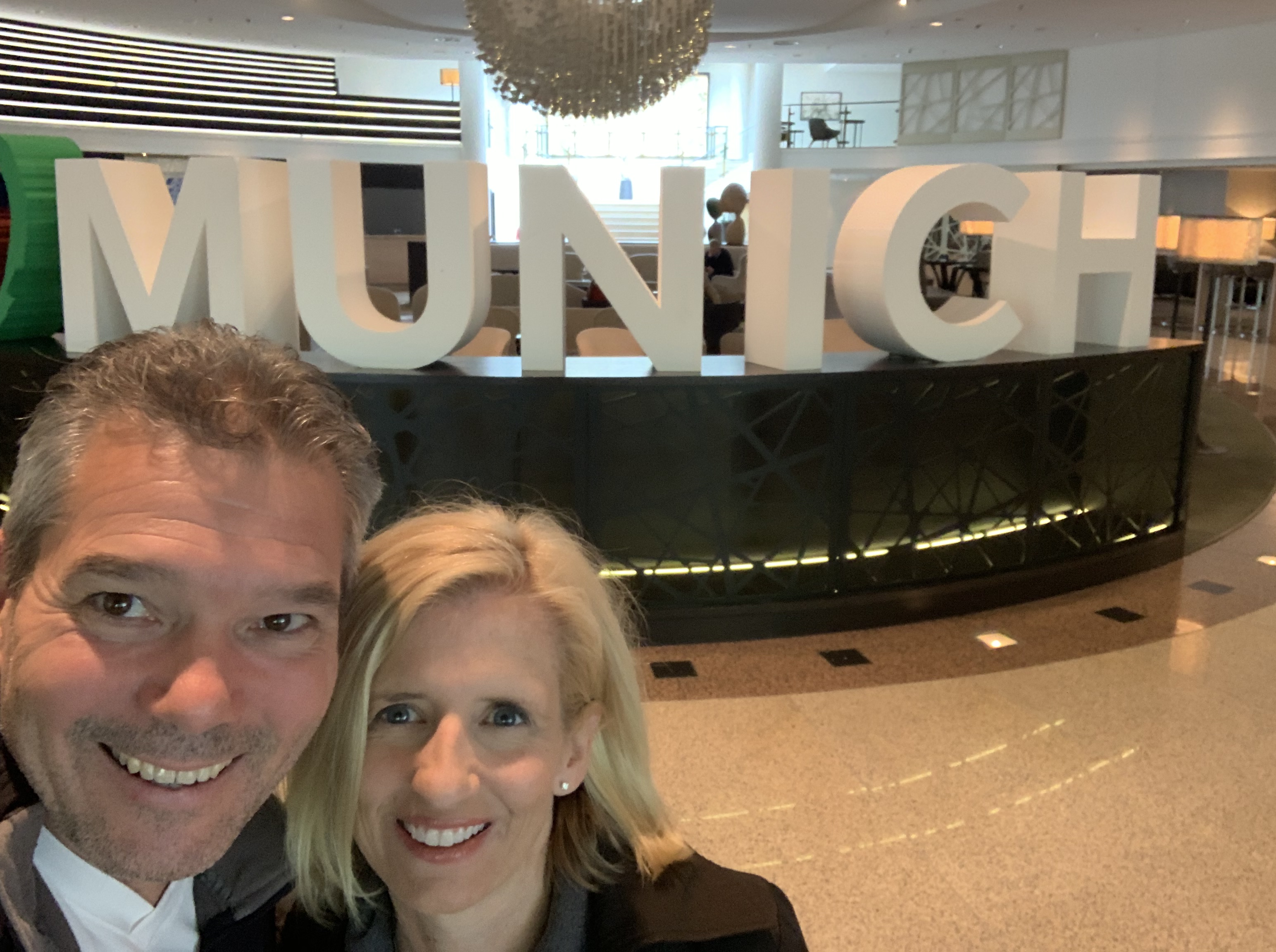 Surfers in the canals!

I couldn’t stop looking at this building. So beautiful. Look toward the top of picture at the Glockenspiel. There are 32 life size figures. The figures come to life 3 times a day. The glockenspiel tells of 2 different stories. The top celebrates the marriage of Duke Wilhelm V to Renata of Lothringen. The bottom are performing the Schäfflertanz dance. This dance is only performed live every seven years. The Schäffler journeyman started this tradition of dancing to renew sense of joy in the city after the plague of 1517 was over. Munich lost half of almost 20,000 of their city to the plague.